I did it.  I finally got Time Machine working over iSCSI on my OpenSolaris RAIDZ1 ZFS pool: 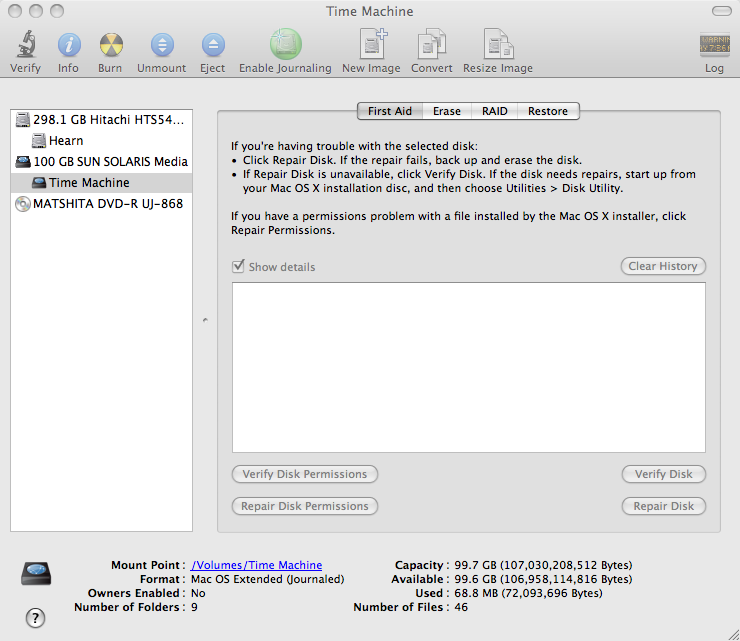 For the most part, I followed the instructions here:

Step #6 didn’t make sense to me (not sure what I was supposed to do), so I skipped it.

It also wasn’t quite as plug and play as the article suggests.  Here’s some of the problems I had to overcome:

That’s it!  Thankfully once I had done that, I was able to connect to the target via the globalSAN iSCSI Initiator for OS X.  I actually expected it not to work, but it worked without a hitch!  I was able to format the ZVOL HFS+ so Time Machine could use it, and my backups began!  This was much faster performance-wise than AFP on Linux, and I didn’t have to trick time machine into using it!

Things I still need to do:

iSCSI uses a LOT of TCP overhead, so keep that in mind if you’re doing it yourself.  I have a gigabit switch in my office that all my machines hook into, so that traffic is kept off the main network.  I would not try it over wireless (if that’s even possible).

The more I learn Sun, the more I’m realizing it’s not really for the “latest and greatest” technologies, but rather a rock-solid stability.  OpenSolaris seems to be trying to bridge that gap, so I’m looking forward to seeing where it goes.