Apple recently announced that on January 31, they will stop manufacturing the Xserve.  My initial reaction, like many other Xserve admins, was shock.  All of a sudden, all this hardware became obsolete: 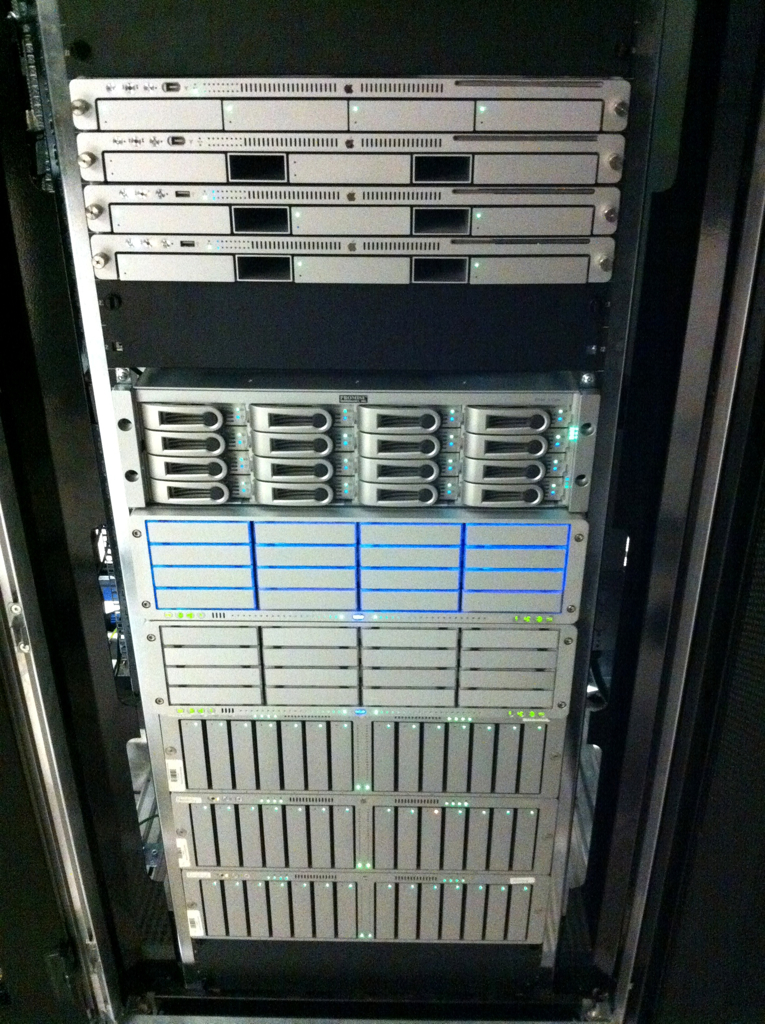 The more I thought about it & read the reactions of other Apple admins, I realized a few things:

It’s important to note that Apple is not discontinuing the OS X Server operating system itself.  They will continue to sell it on their own hardware, the Mac Pro and Mac Mini.  These options may suit small businesses or the home enthusiast, but you won’t find either in an enterprise class datacenter.  John Welch wrote an article for Macworld explaining why in better detail.  The gist of it is this:  neither the Mac Pro or Mac Mini have hot swappable parts or remote management tools such as Lights Out, both of which are a necessity when managing servers on a large scale where high availability is critical.

One of the things that struck me as most peculiar is that Apple never announced a roadmap for the Xserve.  Enterprise IT is a very costly line of work, one that requires extensive planning.  A roadmap is against Apple’s very core identity, to keep future plans a secret which builds customer anticipation.  The fact that the Xserve was even adopted in the enterprise marketplace was nothing short of a miracle.  I wouldn’t see that happening with any other vendor.

I don’t think Apple is shortsighted enough to not realize the importance of having the Mac in the enterprise and educational environments.  They wouldn’t have left OS X Server around just to leave it restricted to the Mac Mini and Mac Pro, because they know there will be even less sales on those platforms.  They also know neither will make it’s way to the enterprise datacenter.  The Xserve hardware was introduced in a time where one server meant one physical 1-2U box per server OS.  These days, server operating systems are virtual, consolidating several server operating systems to one larger box called a hypervisor.  It’s a winning design because it separates the server’s dependency from the hardware itself, which makes for easier management and more efficient use of resources.

My prediction is that sometime early next year, Apple will announce OS X Server to be fully supported to run in a virtual environment, most likely VMware ESX.  VMware already has a dominating presence in the enterprise datacenter as hypervisor of choice for virtualizing server operating systems.  Several key points to why I think this will happen:

My hunch also tells me this announcement will come around January’s Mac Event and Macworld Expo.  We’ll see Apple modify OS X Server licensing to make it compatible to run in VMware ESX, regardless of the hardware ESX is on.  It will not be a big announcement, because Apple is not focused on enterprise IT.  However, all signs are pointing towards the fact that Apple understands OS X Server means more OS X clients in education & enterprise, which means more OS X clients for the home user, which definitely appeals to their bottom line.