Being hard-of-hearing (deaf), I’m not able to take advantage of everyday niceties most people take for granted. One of these is talking on the phone. I’m grateful to be living in this technology age, because I personally know some who weren’t so fortunate. One of these bits of technology is the Sorenson VP200 Videophone & relay service. Unfortunately, I don’t benefit from the relay service because I’m not fluent in sign language (I speechread). Sorenson’s relay interpreters will not relay via oral interpretation; only sign. Yes, that sucks (& is possibly illegal), but that’s another blog post. What I do benefit from is that my father (who’s deaf as well) also has this phone, so it provides a great way for us to call each other.

However, one of my primary gripes with Sorenson’s service is that they provide their own router along with the video phone. By default, they’ll insist the router has to be first in line to be hooked up to your cable/dsl/whatever modem. I was not happy with that at all. I did not want my primary router to behind theirs for any reason. Also, requiring the router & videophone to be near the cable modem is an awful requirement to have. What if you don’t have a TV nearby? Why should we be required to reorganize all of that equipment? I will say that to appease the Sorenson install guy (who was very nice, by the way), I let him set it up his way. The VP-200 is provided free from Sorenson, so I didn’t want to do anything to piss the guy off & have him refuse to install it. Lucky for him, I just so happened to have a TV near my cable modem. I later found out this was a good move on my part, because my father mentioned to his support tech what I did, and that guy said if Dad didn’t leave it set up his way, he’d be forced to take it back. I guess it’s only free if you do it their way? >:-(

Ok, enough soapbox ranting, on to the technical details;

Once the Sorenson install guy left, I promptly unhooked everything he did because I wanted to relocate the videophone upstairs to my primary TV since that TV is bigger & we are usually upstairs so that way we wouldn’t miss as many calls. Only problem is my house isn’t wired for ethernet connectivity, and the Sorenson router isn’t wireless. Lucky for me, I had just upgraded my primary router to a Linksys WRT600N, so I had my trusty old WRT54G sitting in my closet begging to be put back online. Perfect opportunity.

I’ve been running DD-WRT firmware on my routers since I bought the WRT54G 5 years ago, and I can’t say enough about how awesome that firmware is. It transforms your SOHO router to a $600 router. Unfortunately, the process for flashing DD-WRT over the default Linksys firmware varies wildly depending on your model router. It has gotten a lot easier over the years, but I remember the first time I did it. I’ll just say the pucker factor was pretty bad, because then the chances for bricking your router were higher than they are now. I’m not saying it’s foolproof now, but if you’ve never done it & you want to, I highly suggest getting a router that’s known to be fully compatible. 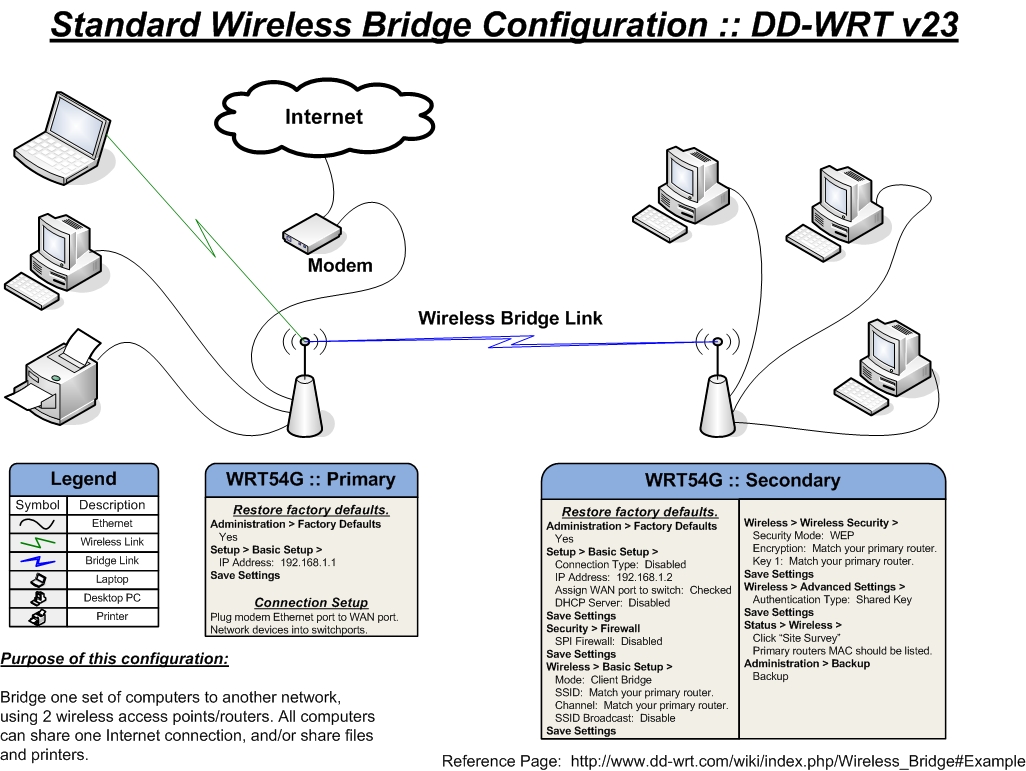 Basically, I’m running two wireless bands on my WRT600N: 2.4GHz Wireless G & 5GHz Wireless N. The WRT600N has a separate antenna for both. My N network is my primary wireless network that laptops and other wireless computers use. The G network is only there for other devices that don’t support N. So, my bridge is running wireless G. This isn’t an issue for me because the VP-200 isn’t capable of fully saturating a G network, as it usually runs around 250Kbps max up/down and G’s real world average is around 24Mbps, so plenty left over. I won’t go into full detail about how to set up the bridge, because it’s already been documented very well on the DD-WRT Wiki. I will, however, go into some detail about some of the problems I had getting the VP-200 to work over the bridge.

At first, I left the SR-200 (Sorenson) router hooked up to the VP-200. I assigned the router itself a static IP address from my WRT600N, and put that IP in the WRT600N’s Demilitarized Zone (DMZ). What this does is makes the router itself act like it’s plugged directly into the cable modem, effectively removing any port configuration necessities & firewall restrictions. Keep in mind this also means anything hooked up to the SR-200 router would also be fully exposed to the world. In my case, this was only the VP-200, so that was OK with me. This setup worked great right away, and I ran it this way for about half a year.

I eventually got tired of having the SR-200 router hooked up. It just seemed like an unnecessary part of the setup. So, I did some googling and found that it is indeed possible to use the VP-200 videophone without the SR-200 router. There is nothing special about the SR-200 router, and all it does is ensure the VP-200 is in a DMZ. The problem is, the VP-200′s network settings are locked. By default, it wants to be on a 192.168.0.x network, and DD-WRT’s IP range is 192.168.1.x. Furthermore, it’s configured by default to use 192.168.0.125, so the SR-200 would always assign it that IP address. After enough digging, I found the access code for the VP-200 to unlock it to where I could change the settings. The access code, as of this writing, is 5236. Some people say that depending on how knowledgable you can look to Sorenson, they may give you the code if you call their tech support via relay. However, since I don’t sign, that wasn’t an option for me. :) From there, I changed the VP-200 to use DHCP, and assigned it a static IP from the WRT600N, then put that IP in the DMZ. Piece of cake, right? Yes, and no.

In my case, it turns out over the course of a month experimenting with this new setup, I was also getting a lot of wireless interference. I figured that out after troubleshooting just about everything else it could have been. Using iStumbler, I found 30 wireless networks in range of my laptop from my living room. Six of those were using the same channel 11 that I was using, and those 6 just also happened to be the closest. I was getting all kinds of weird problems from the wireless interference, most of which I posted about on the alldeaf.com forums. However, I changed my G band channel to 3 and my problems went away. So, it just happened to be a coincidence that I started tinkering with an alternative setup around the time my neighbors all switched their wireless G routers to channel 11. So, as of this writing, I’m happily using my VP-200 wirelessly hooked up to my living room TV, sans Sorenson’s router. :)

However, if you don’t want to mess with DD-WRT, there are other ways you can accomplish the same thing, such as using a “gaming wireless adapter”, as detailed in this thread. The only reason I went the DD-WRT route is that it didn’t cost me anything extra and it gave me more flexibility/reliability due to the better firmware. If you found this post searching google for how to do the same thing & need help, leave a comment & I’ll get back to you.